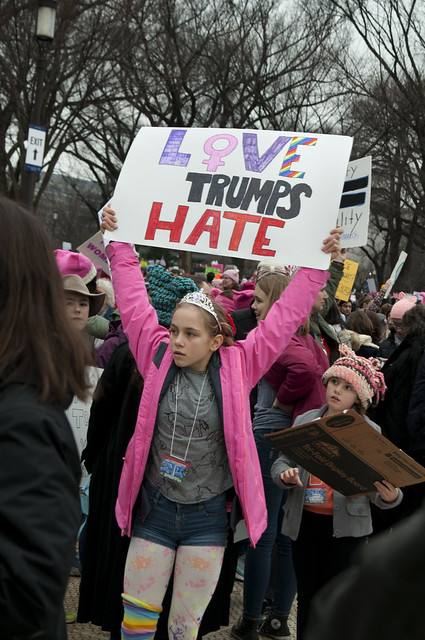 Just one day following Donald Trump’s modestly attended Inauguration pageant, over half a million people – overwhelmingly female, though diverse all-around – jammed the Washington, D.C. mall and surrounding avenues for a highly spirited, highly charged and highly cathartic political rally. Ostensibly, this great mass of humanity represented a broadly-based ‘rally for human rights.’ Organizers went out of their way to promote the march as ‘pro-woman, pro-immigrant, pro-Muslim and pro-LGBTQ rights’ in nature. Indeed, it was all these things, and then some. The planners didn’t want this to be merely a bitter, anti-Trump rally.

Then again, Americans do tend to get much more fired up when gathering in opposition rather than simply in direct support of a cause. The ire and resentment on display on this heavily overcast, yet dry, mild winter day was palpable, even visceral. There was indeed sheer joy and exaltation, just as there was clearly a determined sense of intense reaction and purpose. In a word, fierce.

Not to be overlooked here was the vast ocean of protest signage. A majority of these signs made direct reference to the obvious object of scorn, newly crowned POTUS, Donald J. Trump. A crowd of this magnitude requires a significant rallying point. The Orange One, nasty, brutish and short-tempered he, easily served this purpose. Some of the better signs were simple, direct, and not without humor: “I’m not usually a sign carrying kind of guy, but jeez“. Or, “We Shall Overcomb!” Also, “Keep Your Tiny Hands Off My Reproductive Rights!” Defiance and resistance were the obvious ingredients of the day, bolstered by an epic esprit de corps.

The most stunning point in the march for many came near the end of the route, while taking refuge from the mammoth crowd in the grand-stands of downtown Washington. Gazing back at the Capitol building, one could take in the enormity of this human juggernaut: tens of thousands of marchers of all cultural, religious and ethnic stripes in a slowly moving procession of purpose and determination. Hundreds at a time defiantly chanting in-unison, some blowing shofar-like horns sending the elephantine mass into a frenzy of howls and ardent cris de couer. Wave after wave of densely packed American dissidents made their way down historic Pennsylvania Ave, onto their ultimate destination at the Lincoln Memorial. Enough to etch a proud smile onto Abe’s stony visage, no doubt.

Beyond the great DC throng, enormous mass rallies mobilized in cities all over the country and beyond. In total, roughly 3 million marched nation-wide on this day, the rough equivalent of the popular vote garnered by ‘loser’ Hillary Clinton. Millions more rallied world-wide in solidarity on this same day. In all, legions marched together to support cherished rights and freedoms guaranteed by a Constitution only as sound as the nation that maintains it. “A republic, if you can keep it,” according to Ben Franklin. Let’s not let him down, America.